So where did the monolithic concept of languages come from?

Let’s now focus in on English. English as it is now used in the UK, the USA, and around the world is the plurilithic outcome of the kinds of natural processes we have been discussing: distribution, change and hybridisation across many individuals and groups of users. But most of its users still conceptualise it as a monolithic system that exists externally to them, and to which they have greater or lesser access.

A typical assumption is that the language has an abstract, perhaps ideal form which is detached from any particular socioeconomic class or region, and is independent of contexts of use. This ‘ideal form’ is often conceived of as underlying the so-called ‘standard’ version of the language used in formal writing and by ‘educated’ users. Here (translated from the original Mandarin) is an extract from an interview conducted by colleagues in China with ‘Ms F’, a university teacher of English (see Hall et al., 2017):

The belief in an ideal ‘idealistic, perfect’ version of English—the ‘standard variety’—is the result of the identification of languages as symbols of national identity and, within the national group, of education and power. 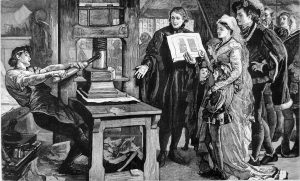 The seeds of ‘Standard English’ are comparatively recent. Before William Caxton’s introduction of the printing press to Britain in the late 1400s, the many widely differing versions of English spoken in the British Isles were not seen as marked by different levels of prestige, and none were seen as more ‘correct’ or ‘standard’ than any other. Due to ultimately quite random sociohistorical factors, the earliest printers selected the variable English spoken between London, Oxford, and Cambridge to fix into a more or less stable and enduring form. It thus gained a social status that distinguished it from other unprinted or under-printed dialects. With the rise of the concept of the nation state during the Renaissance period, this newly prestigious form of English began to be viewed as the ‘National Language’ and so was subject to further codification (e.g. in dictionaries), mythologisation (e.g. regarding its purity and logic), and, in the 18th century, a doctrine of correctness.